Devils in the depths: the cannibals of Clovelly

"Arms, legs, thighs, hands and feet, of men, women and children, hung up in rows, like dried beef and a great many lying in a pickle..." 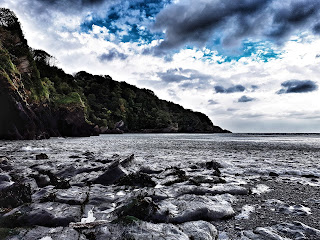 I've always been fascinated by tales of the Wendigo, reading about these predatory and ever hungry spirits gives me chills, especially when reading about people's personal experiences. It makes me eternally grateful that we don't have them here in England. We just have a history of "normal" cannibalism. If you can call it normal.

I'm currently in Devon with friends, it's late at night and we're cosy and safe in our caravan. Outside storm Callum is pitching a fit. I choose to ignore that our caravan is very close to the edge of a cliff. It reminds me of a holiday a long time ago, when I was little, listening in horror and fascination as my Stepfather informed me that there were cannibals at the place we'd be visiting the next day. It isn't something found in the tourist leaflets for Clovelly but in books, the internet and word of mouth. An alleged story of local horrors, it seems that the tale is just a retelling of the story of Sawney Bean.* Unlike Sawney's story, this tale comes in the form of an eight page chapbook, with an unknown author. It's the only copy in existence and can be found in Bideford, another town in Devon. Smuggling was rife at the time, tall tales to keep people away from the smugglers hideouts were common, although this is the most gruesome I've heard so far.
Living in a coastal cave, along a rugged stretch of coast near Clovelly, they were lead by the patriarch, John Gregg. It isn't hard to guess why they lived there. For a poor family, with no money or home, any shelter would do. As for the attacks, those probably started as highway robberies, a way to make ends meet and stave off starvation for another week. However for some unknown reason, something changed. Maybe a robbery gone wrong, an ill-conceived way to hide bodies or maybe a harsh winter and starvation. We will never really know or understand why, but the family started to murder and eat people, going from "your money or your life" to "your money and your wife." They would ambush and attack their victims on the road, drag the bodies back to their lair and strip them of both valuables and flesh. Hidden in the cave with all the food they could ever need, the family itself grew and grew. It consisted of John, his wife, their fourteen children and a grand total of around 32 grandchildren. Because the family didn't leave their cave for anything other than a spot of murder, they grew more and more inbred and monstrous with each child born until they were barely recognisable as humans. If they had been real then it would have been a miracle that such a large and feral family wasn't caught sooner, yet the story tells us that they managed to vanish up to one thousand people in a twenty five year period and nobody outside that cave had a clue what was happening. A happy, safe, well fed family of monsters. After getting away with such abominable acts for so long they would have felt untouchable, so it's no surprise they got over confident. To put it bluntly, they cocked up. 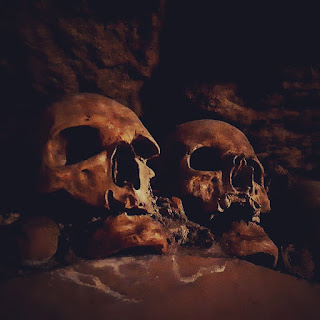 Their downfall came in the form of a nameless couple traveling home on their horse one night. The Gregg's ambushed the couple, succeeding on dragging the wife from the back of the horse whilst the husband spurred the terrified beast on, making for the safety of the nearest town and leaving his poor wife behind to be savaged by the terrifying, ghoul like creatures that had crept from the shadows to set upon them. Fetching help, he headed back to where he was attacked with a group of curious townsfolk in tow, but nothing was found but the brutally mauled body of his late wife. Word of the incident quickly spread, a posse of four hundred men was formed, with a pack of baying bloodhounds for tracking. These dogs followed the scent of the family back to their underground lair, where the men that accompanied them were introduced to a subterranean world of horrors that rivaled any horror movie. Thousands of bones littered the cave, piled up in corners as if in some macabre attempt at housekeeping. Hung from the ceiling, like meat in a butchers window, were the limbs of more recent victims. Not one of them were spared, as even the remains of children could be seen swinging in the sea breeze coming through the entrance of the cave. Dark and lit by torchlight, echoing with the sound of excited bloodhounds and filled with the stench of death, it was a house of horrors. And there, in the middle of it all, preparing to put up a fight, were the Greggs. It was a good job that the men had come in such large numbers, a smaller group would have ended up in Ma Gregg's cooking pot along with their dogs for a bit of variety. After a bit of a scuffle, the men managed to drag the whole family out of their hole and into the light for all to see. From their the Greggs family were sent to Exeter to be trialed for their crimes, but all agreed that there was no need for that. No Judge in his right mind could possibly find John Gregg and his foul kin not guilty. The whole family was hung until dead. Even the poor, malformed and savage children. Because this story is more than often told word of mouth, another version states that they were instead burnt alive in three large fires. It's a short tale, but one that has crept so smoothly into folklore that many still believe it to be true, as I did as a child when my Stepfather told it to me so gleefully.
If one thousand people going missing over such a short amount of years with nobody questioning it wasn't proof enough that the tale is fictional, then the fact that there are no court records, newspaper clippings or even a burial sight is. It would be easy to say that maybe people just forgot, but there's no way that crimes as grotesque as those of the Greggs. The people of the 18th century were good at keeping records, you only have to look at Bodmin Jail for proof of the crimes of that era, or visit The Clink in London. Since executions were considered a form of entertainment, people would have flocked to see the end of ghoulish family, there would have been personal accounts from those involved. The burial sight alone would have been a tourist hot spot, both then and today. Although now they would probably charge you an entrance fee to visit it. There might not be records of cannibals, but there are records of smugglers. Folklore is rarely pleasant, usually stories such as this are meant to serve as a warning. The village of Clovelly is beautiful a joy to see and visit. The coast that surrounds it is wild and mysterious. In the days when people were more superstitious it wouldn't be too hard for people to believe such a tale. Keep away from the smuggler's cave would have just lead to arrests, possibly a few hangings. Easier to associate a tale of horror to that place, to warn people away with fear. And if folks go anyway and disappear? Well, you were warned. Maybe the Greggs are still hungry, even in death.

All photos taken by myself and owned, please do not use or re-dispute without asking permission.

*Alexander Bean, also known as Sawney Bean, was allegedly a man from 16th century Scotland. He and his forty eight member strong clan were said to have been responsible for around the same amount of murders over a similar time span to that of the Greggs, who's tale was told much later in the 18th century. The similarities between the two are obvious, though the Greggs story is set in a different location. As with the Greggs, there is no proof that Sawney existed, instead it's highly likely that he was created as an act of anti-Scottish proper gander.