I've been puzzling over what to write for an Easter blog for weeks now. Spring and the festivals based around it are fascinating, but I just wanted to do something a bit different. For a while I considered a post on my top 5 creepy Easter Bunnies, but while researching them I remembered that there's one Bunny out there that is much more frightening. And he doesn't want to give you a chocolate egg.
Everyone out there will be familiar with some sort of urban legend. While such tales might be over exaggerations of the truth, that isn't the case here. The Bunny Man of Fairfax County, Virginia, is an odd but enduring urban legend that can be traced back to actual events. And those events are just as strange as the legend itself.

The Legend
If you go to the bridge on Colchester Road, at midnight on Halloween, you could fall victim to the sinister Bunny Man. The name of this horror adds an absurdity to the tale, it's hard to take someone calling themselves the Bunny Man seriously and gives me the feeling that he only catches people because they're laughing so hard they can't run. The bridge is officially known as the Colchester Overpass and doesn't look like anything special, just a one road tunnel under the train tracks. It really doesn't look scary.
Like most urban legends, there are a lot of various different variations of this one. As a result I'm going to focus on the most well known one. The story starts in the early 1900's when an insane asylum outside of the town of Clifton was closed down. Residents of the town had been horrified that an asylum had been built there, especially one that housed the most dangerous and violent of prisoners, so they successfully petitioned to have the establishment closed. It was arranged for those held there to be moved to other asylums elsewhere, but one of these transfers went disastrously wrong when one of the busses skidded off the road and crashed. The bus driver and most of those aboard died in the crash, but a handful of men escaped. Most of them were easy for the police to round up, but two of them eluded capture, Marcus Wallster and Douglas Griffon. Soon locals started to find the dangling bodies of skinned, uncooked, half eaten rabbits. The police continued their search and the bunny corpses kept piling up. Just when the police and locals thought it couldn't get worse, it did; the body of Marcus Wallster was found. Some say it was found hanging from a tree by the bridge, others say from the bridge itself, but poor Wallster was in the same state as all the rabbits that came before him. Mutilated. Skinned. Half eaten. But this body was accompanied by a note.


"You'll never find me. No matter how hard you try!

It turned out the police had left out one very important detail when they'd announced Griffon's escape. He wasn't just a lunatic, he was locked up because he was a murderer who had killed his entire family with an axe, on Easter morning. A large search party was was formed by the police, and they frantically searched for Douglas Griffon, now known as the Bunny Man thanks to his mocking note. Eventually they managed to corner him by the train tracks. Determined to evade capture, Griffon attempted to get to the other side of the tracks, as a train was bearing down on him and his pursuers. Although he had named himself the Bunny Man, he wasn't as fast as a rabbit. The train struck him and killed him immediately.
The story continues that during the 1970's three groups of teens turned up dead at the bridge over the space of several Halloweens. Hung, skinned and with their organs eaten. There were a couple of survivors, but they were driven mad by the horrors that they had witnessed and ended up in the insane asylum that the Bunny Man himself was destined for. It is said the mad spirit of the Bunny Man has returned to continue the killing spree he intended to start with Marcus Wallster and if you visit the bridge at midnight on October 31st, you too could fall victim to this lunatic or, if you're very lucky, just see the light of his torch as he stalks down the railway tracks to the bridge.

The Truth
As you may have guessed, there is no truth at all in the urban legend. The insane asylum never existed, neither did Griffon or the ill fated Marcus Wallster. There's no evidence that any teens died at the bridge in the 70's or that any survivors were institutionalised. So where did this legend come from? What started an urban legend so enduring that the bridge involved has become known as the Bunny Man Bridge, even on maps? The answer is just as strange as fiction. In the 1970's the town of Clifton was going through a period of urbanisation, new buildings were springing up and new people were moving into them and it would seem not everyone was happy about that. One man was so displeased that he took to roaming the streets at night, welding an axe and wearing a bunny suit. The first sighing of this individual came from a couple who had stopped their car by the bridge. They reported that a man, wearing white clothing and something on his head that looked like bunny ears, had approached their car. He ranted and raved at them, telling them that they were on private property and that he was going to call the police. Then he hurled his axe at their car, where it struck the windscreen and went through it, nearly hitting the terrified occupants. Hitting the accelerator, the lad in the driving seat got himself and his lady friend out of there. Adding credibility to the story is the fact 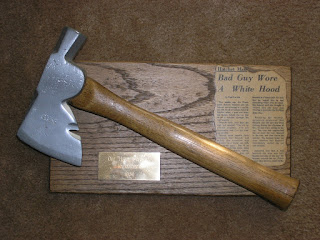 that it isn't one of those "heard from a friend of a friend" stories. The frightened couple went to the police and reported what happened, and the driver was an air force cadet. Although the police searched the area, they found nothing. As for the axe that was thrown through the couples windshield, they were allowed to keep it when it yielded no evidence. They had it mounted next to a news article about the sighting and you can now view it in one of Clifton's museums.
Not long after this another sighting was reported to the police. This one would be the part that adds Halloween night into the urban legend, as it was about this time that this Bunny Man began to stalk a construction site. It was on one of the new housing developments that he was spotted, by a security guard, this time vandalising one of the newly built houses. Even though the security guard didn't get too close to the strange man, he still became the target of his ranting and the guard reported that the man shouted at him:


"All you people trespass around here, if you don't get out of here then I'm gonna bust you in the head!"


Sensibly the security guard backed off, retreating to call the police. Once again the Bunny Man was gone by the time they got there and no sign of him could be found. As with a lot of stories like this, things went wild when the newspapers got hold of it. Reports of Bunny Man sightings started to come in from all over Clifton and surrounding areas, some more believable than others and some of which could have just been copycat Bunny Men. Think of it as similar to the Evil Clown craze of 2016. At one stage someone claiming to be the Bunny Man even contacted the police, demanding they meet him at the bridge on Halloween, but he never showed up.
Eventually sightings stopped, but people didn't forget. Instead of telling the story of what happened, which is an odd enough story on it's own, the tale got twisted into the gory urban legend we know and love today. I guess "Local Man in Bunny Suit, Angry About Housing Boom" doesn't really send a chill down your spine when you're telling creepy stories around the camp fire.

Visiting the Bridge
While you can drive through the bridge, I wouldn't bother stopping. I should warn you that stopping there is considered trespassing and, if caught, you could face a fine of up to $250 (£192.39 at the time of writing this blog.). It is also illegal and highly dangerous to try to walk on the railway tracks there. Plus if the authorities don't get you, then maybe the Bunny Man will.