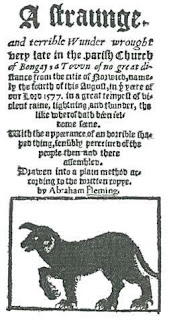 Visiting Blythburgh and Bungay.
The weather couldn't have been less like that in the story if it tried. Plenty of sun and blue skies, a slightly cool breeze that left off after a while. It was early in the morning and after a super healthy breakfast of McMuffins, we set out sat nav for our first stop, Blythburgh.
I think my friends (M and D.) and I were expecting something from a Hammer Horror movie, but the Holy Trinity Church is a stunning 15th century building, easily accessible with a car park right next to it. A large church, it's deserving of it's nickname: the Cathedral of the Marshes. I could go on and on about the beauty of this building alone, but you're here for the folklore. Because this is the church with the infamous claw marks. At first we couldn't find them, it turned out that we were looking at the wrong door. Opposite the main entrance is a matching set of ancient wooden doors, and it is here that the Shuck left his mark. The marks are quite deep, but smooth and shiney from years of being touched by the hands of the curious. They are definitely burn marks, but claw marks? The sceptic in me says no, most likely candle burns, but I still love the folklore behind them. Before we leave we explore the church fully, delighting in it's architecture and calming atmosphere. I'd also like to point out that, as well as tours being available there, it does have a small gift shop (cash and correct change only.) and all proceeds raised from it goes towards the upkeep and restoration of this much loved building. Outside the graveyard is also a pretty one, with a path leading around the church and down some steps to the toilets.

Bungay is much bigger than Blythburgh and also has a castle (accessed through a restaurant, Jester's, which I really recommend for good food.), an observatory and a small museum that you can visit. We didn't just visit the church, but the whole town. The Shuck is everywhere here, even the town football team is named after it. On the outside, St Mary's Church is an imposing building, but inside it is warm and soothing. It's hard to imagine the Shuck wreaking havoc here too, but according to folklore that's just what it did. The hound itself appears here as a beautifully sewn tapestry on the church wall. Take a couple of quid with you, because here you can buy an illustrated booklet telling you all about the Black Shuck and the events of 1577. If ruins or memento mori are your thing then this is also the church for you, as behind it you can find the ruins of a previous church building and the graveyard is home to many well worn, but still beautiful, skull headstones.


Have you been to Bungay or Blythburgh? Do you have any stories to tell, maybe you've seen something a little Shuck-like yourself? Let me know in the comments below or tag me on Twitter! I love hearing from you guys and, unlike the Black Shuck, I don't bite!