It's my favourite time of the year. I adore Autumn, with its

misty mornings, coloured leaves and golden light. After the dryness and heat of the summer, the coolness and frosts are welcome. It's the perfect time for long country walks and berry picking. Although, according to folklore, you might want to be careful about what you pick after the 29th of September; St Michaelmas Day. The feast of the Archangel Michael, associated with the beginning of Autumn, this holiday has many stories to it and everyone who celebrates it seems to have their own interesting ways to do so.* My favourite story associated with St Michaelmas of one of spite and blackberries.
Folklore tells us that not only is the 29th of September** the feast of St Michael, but it is also the day that St Michael drop kicked the Devil out of Heaven. Now the fall from Heaven was long and unpleasant, so when he collided with the Earth the Devil was already in a bad mood. But what made that mood even worse was what broke his fall. A blackberry bush. Not a little one either, but one of those big ones that tower above you, that have the biggest thorns and always have the plumpest berries just out of reach. After flailing around helplessly in the bush for a while, the Devil finally managed to pull himself out. And he was not amused in the slightest. Shouting and cursing, he decided the best way to express his rage was to piss on the poor bush. This is an act he has apparently repeated every St Michaelmas Day since then, though in some versions of the story he spits on the bush rather than relieving himself. Blackberries tend to get bitter later in the season and prone to rotting on the bush, most likely this is what lead to this particular bit of folklore. Whatever the case, it is rather amusing that people believed the Devil had nothing better to do with his time than going around and peeing on each and every bramble out of spite. But then that is the folkloric Devil for you; a sore loser, often a little dim and easily fooled, as you will no doubt see in future folklore related posts. 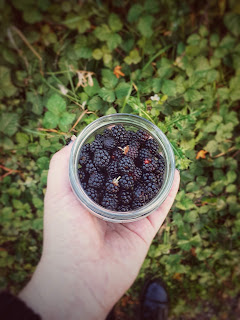 Now, that's the folklore. How about a recipe? I could have suggested a pie or crumble, even a sauce to go with chicken, but I'm going with a nice Blackberry Whiskey. There's nothing more pleasant on a chilly winters night than a little glass of something warming, but I'd still like to take this opportunity to remind you to PLEASE DRINK RESPONSIBLY.


That being said, here is the recipe for Devil's Brew: 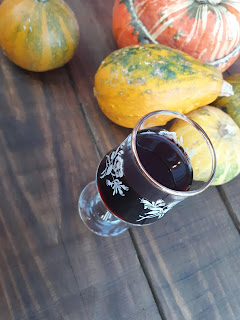 Once you've got your whiskey bottled you can start drinking it straight away but it's best to leave it till the winter months, to let it settle a little. You should be left with a dark, almost black brew. Sweet, slightly thick and aromatic, this whisky goes down warm and has a kick like the Devil himself. It's perfect on its own or with tonic, goes quite nice in an apple and blackberry crumble, you can use it in jams and it's even quite pleasant on good vanilla ice cream. I've been using (and enjoying) this recipe for a good few years now, it's evolved a lot from the original, which called for brewers sugar and was unbearably sweet. I've picked more berries for this year's whisky and I've picked a couple of cups extra for an extra Devil's Brew project as I intend to try my hand at Blackberry and chilli Mead. We'll see how it goes and, if all goes well, then you can expect another post about the Devil in Folklore and recipe soon. If you try out this recipe and enjoy it, let me know in the comments or tag me in a Twitter post, I'd love to see what you think and see some photos of your brew. You can find me on Twitter at @LWall54451552.

*I was especially impressed with the home made Devil/Dragon pinata!
**In some of the stories I've read the dates are different, giving the date of October the 10th or 11th instead of September the 29th. Known by some as Old Michaelmas Day, and is considered another day on which the Devil was evicted from Heaven. This was most likely caused by a calendar reform in 1752.

Seriously though, please drink responsibly.
Posted by Lenny Wall at 2:50 PM No comments: 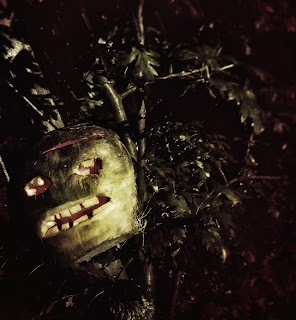 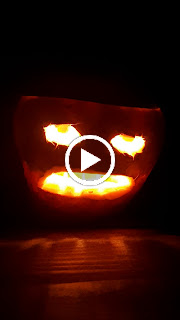 Posted by Lenny Wall at 2:29 PM No comments: