Trick or Treat: the Folklore of Halloween 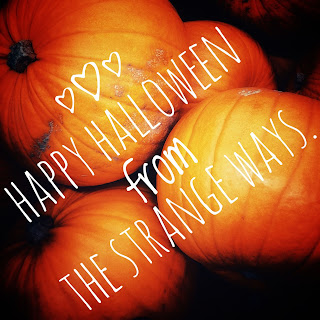 I love Halloween. There's no denying it. I adore carving pumpkins, decorating my home, dressing up.
I love eating all the sweets that I can get my hands on and watching horror movies til I can't sleep. But, most of all, I love the history and the folklore. For now we're going to cover the superstitions linked to Halloween, so we'll cover its history another time. As much as I would love to go over that topic here, I feel it's a topic deserving of it's own post. For this post I've chosen my top five favourite superstitions and that was not an easy task, because there were a lot to choose from. Not surprising, since this holiday can trace its roots straight back to Celtic times.

1. The humble apple has often featured in folklore and tradition for hundreds of years, but could this beloved fruit really predict the future? it would seem that many thought this was the case, as long ago it was common to use the peel of an apple to predict the first letter of your future partners name. The individual wishing to divine this information would sit themselves down with an apple in Halloween night. They would then peel the apple, taking care to keep the skin whole and, once they had managed this, would fling the peel over their shoulder. If done correctly then the discarded peel would, allegedly, land in shape if whichever letter your future loves name started with.

2. Halloween costumes are a wonderful Halloween tradition, planning what costume you're going to wear, for Trick or Treating and partying, is just part of the fun. Some people spend weeks working on their disguise, while others grab a pre-made costume. Most of these folks are completely unaware that this tradition has darker roots. It was believed that on All Hallows Eve all sorts of ghosts and ghouls stalked the streets, looking for people to scare or even whisk away with them come the light of day. As a result people worked out that the best way to get around this and stay safe was a disguise, the theory being that if the creatures of the night thought you were one of them then they would leave you alone.

3. The air is chilly, filled with the distant smell of bonfires and the sound of leaves crunching beneath your feet. Maybe you've been to a party, trick or treating, a haunted house or even just your friends house, but whatever you've been up to, it's been a good night. However, you find yourself faced with a long, dark, misty walk home through the now empty streets. Other than the sound of your own footsteps and the occasional passing car, it's pretty quiet. Then. after a while, you start to realise that that's not entirely true. There is another sound. Softly at first, a barely noticeable shuffle on the damp, leafy pavement behind you: footsteps. And you know there isn't anyone there. And yet you can hear them, that soft shuffling and padding of feet where there should be none.
Sound familiar? I sure hope not! If you hear the sound of footsteps behind you on Halloween Night, when you're all alone, don't look. It could be a lost spirit. These lonely spooks are known to search out company, even following people home if acknowledged. The best thing to do is ignore them all together and hope they get bored and move on.

4. Were you born on halloween? Well, depending on how you feel about ghosts, that may or may not be a good thing. Folklore tells us that a baby born on October the 31st will be gifted with the strange ability to speak to the spirits of those who have died. A natural born medium. However, since children are said to be particularly sensitive to ghosts, this is a hard one to prove. Are you a Halloween baby? Have you had any experiences that you feel are linked to this? Let me know in the comments bellow, I'd love to hear your story!

5. Everyone loves a good Jack o' Lantern and, as well as being fun to carve, they have a fascinating history behind them that I covered in my first ever Halloween post; Back to basics: The Original Jack'o'Lantern. I also covered a little of the folklore behind them, such as how a lit lantern will scare evil spirits away from a persons home or from the person carrying it. However I forgot to cover one important bit of the folklore, when to blow out the candle. Remember not to blow the candle out before midnight, to do so invites bad luck and evil spirits into your home, instead of repelling them. It's best to let the candle burn out on it's own, as this causes no harm.


I'm not going to lie, I cheat a little on that last one, since for safety reasons I use led lights instead of candles. Why safety reasons? My cat, ironically named Pumpkin, is liable to singe off her whiskers if left near an open flame. Whoever decided cats were intelligent has clearly never met my fur baby. Clumsy kitties aside, I thought I'd end this post with a recipe. As beautiful as Jack o'Lanterns are, a lot of them go to waste, either being left to go mouldy or just binned. It seems such a shame, because pumpkin is delicious. So I thought I'd share my pumpkin soup recipe with you, so once Halloween has gone you can still get some use out of your Jack o'Lantern.
This recipe can be turned into a vegan friendly one, and I've included which ingredients can be changed in the ingredients list.

This should produce around 4 hearty servings. 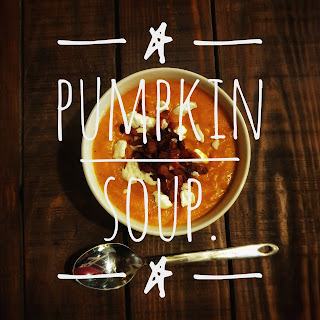 Note: if you want more spice then you can include the chilli  seeds and use 1 tsp on smokey paprika. You can also add more garlic if you prefer. 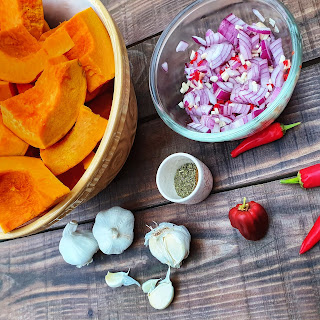 WHILE THE PUMPKIN IS COOKING:


Now you have your cooked pumpkin and onion mix, blend the ingredients together with the stock and cream cheese, until smooth, adding salt and pepper to taste. Two cups of stock will give you a nice thick soup, so if you want it to be more runny then add one extra cup.
If you want to serve the soup straight away then just heat it up and serve with crusty bread and garnishings if you prefer. It's delicious topped with crispy bacon and feta OR toasted walnuts and a vegan feta alternative.
If not serving straight away, this soup can be frozen but should be fully defrosted before heating and serving. 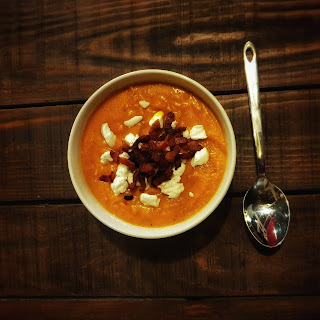